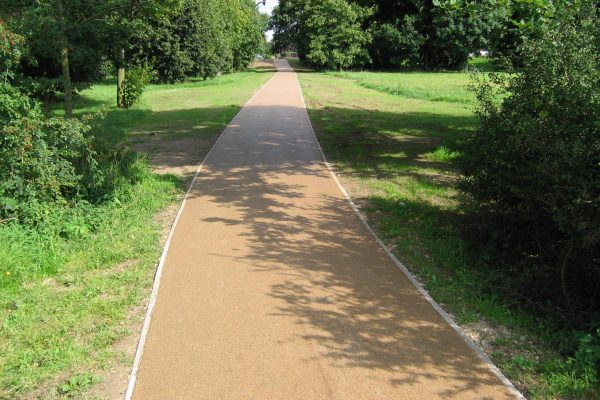 Decorative cycle paths really come into their own during the summer months. There isn’t a better time of year to ride your bike for the commute to and from work, for fun, or as part of an exercise routine. More daylight and better weather makes the whole experience more enjoyable. When getting around town a cycle route misses out the worst of the traffic congested roads. Often going through parks and along old railway branch lines which were closed in the 1960’s. Getting on your bike really does give a different perspective on the world around us.

Dedicated cycle routes take people off the roads and away petrol and diesel fumes. Zipping along and getting a healthy dose of fresh air and pedal powered endorphins! Cycling is acknowledged as a fun way to exercise and an environmentally friendly form of transport. There are sporting and recreational groups and programmes up and down the country as the UK aims to close the gap in the number of cyclists in comparison to European neighbours like Denmark and The Netherlands. The recent success of British Cycling at the Olympics and the dominance of Team Sky’s Sir Bradley Wiggins and Chris Froome in the Tour de France has raised the profile of the activity and offered much inspiration.

Improvements to the cycling infrastructure has seen an increase in the construction of decorative cycle paths. Enabling a colourful, smooth and weatherproof surface away from motor vehicles, this is a safe zone for people of all ages to enjoy the benefits of cycling. Children and those who haven’t ridden a bike since they were a child themselves can practice and build confidence on decorative cycle paths.

NatraTex manufacture and supply a range of coloured surfacing for decorative cycle paths. To discover more about our product range please see our FAQ’s page. If you would like further information and a quote, please contact us today.